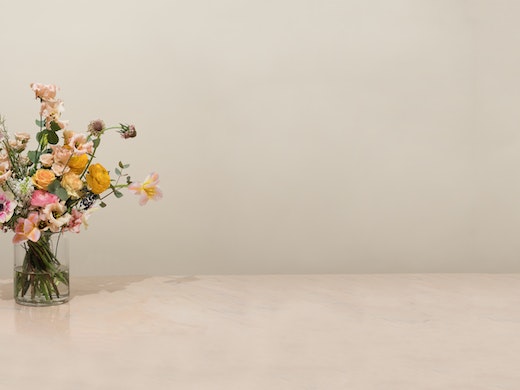 Lisianthus are sometimes referred to as the ‘poor man’s rose,’ to which we say: there’s no place for such snobbery in the Floom flower world! Lisianthus are beautiful in their own right, funnel-shaped blooms in all colours of the rainbow, bursting from long, straight stems. Their proper name is actually eustoma, from the Greek for ‘beautiful’ (eu) and ‘mouth’ (stoma), due to the pucker-iffic shape of their flowers and succulent colouring.

In other words, we thought they’d be a pretty good choice for this FOTW, considering a certain day is fast-approaching in which rose(-like) flowers and connecting with beautiful mouths are on a lot of people’s minds. Lisianthus may not represent the most flamboyant of romantic gestures but sometimes its the quieter ones - the ones that grow in humble locales such as ditches and threadbare fields for example - that capture your heart. Perhaps that’s why the lisianthus are also said to signal a long and happy life, as well as symbolising contentment for the peace and joy you already have in your life.

Our weekly spotlight on some of our favourite blooms... the Nerine
Read more

Our weekly spotlight on some of our favourite blooms... the White Cosmos
Read more

Our weekly spotlight on some of our favourite blooms... Stock
Read more